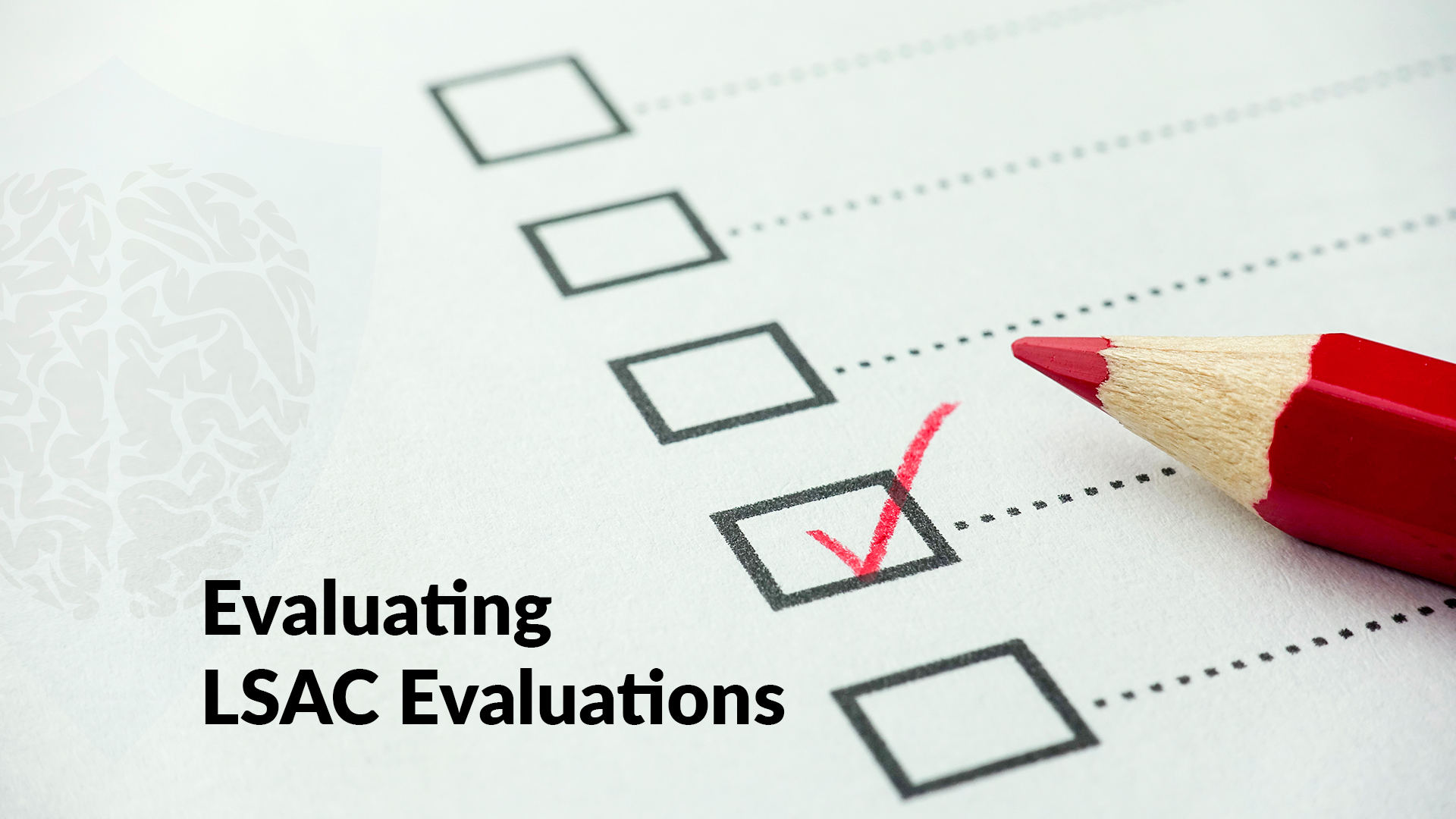 On its website, LSAC states that LSAC evaluations “rate both cognitive and non-cognitive attributes and skills that have been identified as important to successful lawyering, using a scale that represents degrees of a particular characteristic.” Until I actually saw an evaluation in a file, however, I didn’t understand what LSAC was talking about.

For those unfamiliar with LSAC evaluations, rather than being free-form as a letter of recommendation, an evaluation is mostly a multiple-choice rating form. Each question on an evaluation has the same answer choices:

There are thirty questions in LSAC evaluations, grouped under the following six categories: intellectual skill, personal qualities, integrity and honesty, communication, task management, and working with others. To see the specific questions, you can visit the LSAC website here. After each category of questions, there is a “comments” field that allows the evaluator to write additional information up to 750 characters. Then, at the end of the form, evaluators have the opportunity to enter text of up to 3,000 characters. The form also includes questions about the evaluator. Specifically, it asks whether the evaluator is a “Teacher/Instructor, Employer, Coworker, Friend, Family, Other.” It also asks how long an evaluator has known an applicant and when the evaluator last interacted with the applicant.

In my experience as a Yale Law School admissions officer, evaluations were not as useful at getting in-depth information about an applicant as traditional letters of recommendation. Usually, letters expanded on an applicant’s skills, characteristics, and special qualities, and if they were glowing letters, painted a picture of a star. Evaluations, when they were submitted, did not usually go into such detail. Those evaluators that did take advantage of the various comments sections many times simply wrote a few sentences. You want your recommenders to be speaking qualitatively about you rather than quantitatively; you have enough numerical indicators!

However, LSAC evaluations were useful from an admissions standpoint when they were not stellar. Perhaps because of the multiple-choice format, evaluators had to quantify qualities in a way that they would not do in a letter. As such, there were times when evaluators rated applicants as good or average in interesting ways that could ultimately hurt the applicant. (You want evaluators or recommenders to rate you as excellent and truly exceptional as much as possible). Sometimes, in the shorter comments sections, evaluators made statements that were not especially helpful for the applicant. Ultimately, because evaluations can hurt more than they can help, I would leave them out unless they are required.