We’ve arrived at that fateful time—it’s nearly the end of December and almost all top colleges have started notifying students whether they’ve been accepted, denied, or deferred in the early application round. You might be curious about what the early action and early decision acceptance rates 2020-2021 look like for the Class of 2025. As the numbers start to become publicized, it can help to take a look at each of them side-by-side to get a sense of the selectivity across the highest-ranked schools this year.

For a lot of institutions, the early round is when a big portion of the class starts to take shape - In 2019, 51% of Duke’s freshman cohort came from the early decision pool. And it’s only going to get tougher from here. If you’re applying early decision II, in the regular decision round, or even next year, reviewing these numbers can give you an impression of what to expect. Regardless of which stage you’re at currently in your process, take note of some of the top schools’ early action and early decision acceptance rates 2020-2021, alongside what the numbers were like last year.

As you can see, the rate has gone down for every single top college that has so far released early acceptance numbers. Almost all colleges had a significant increase in number of applications as well: 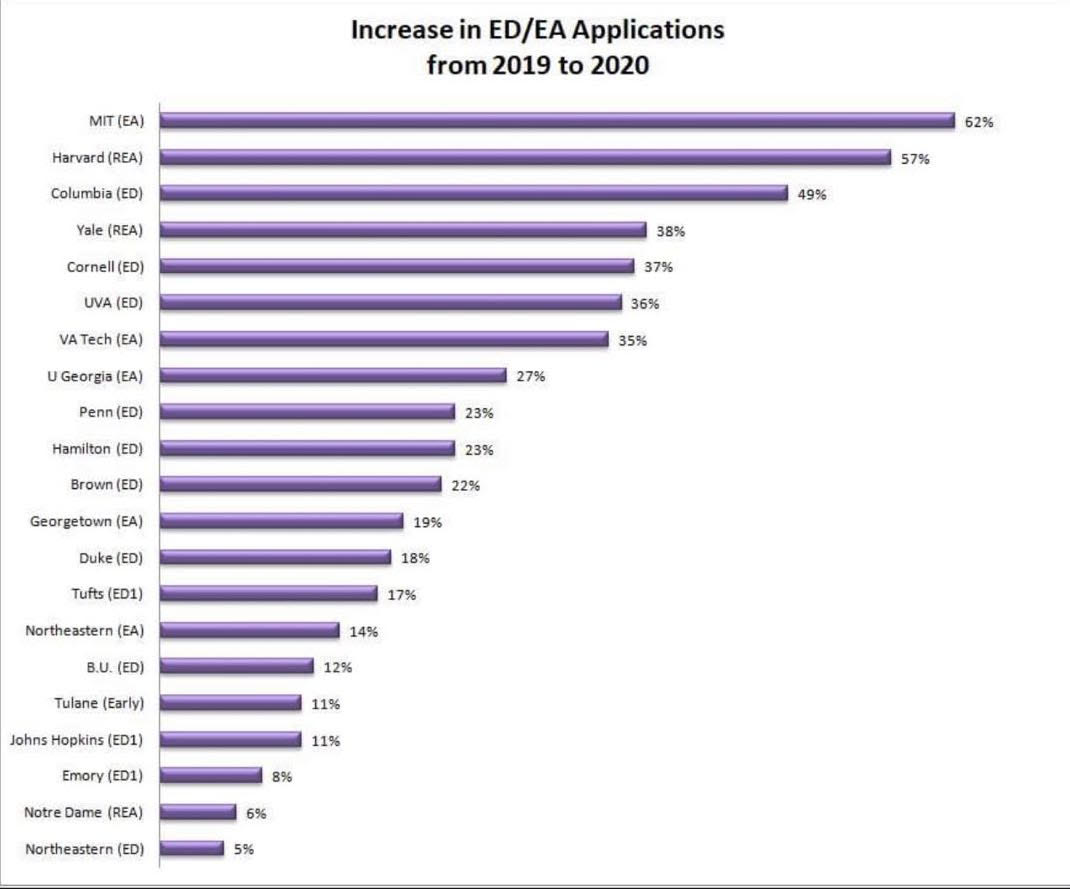 The early decision acceptance rates 2020-2021 might be inflated by recruited athletes and legacy students. But all things considered, these schools are still some of the most selective around the country, as you can see by the numbers at schools such as MIT, Yale, Harvard, and Brown.

Vying for a place at the top colleges will only get more competitive, as they will receive thousands of applications during the regular decision round. Due to the pandemic, early decision applications saw an all time high at many schools, including Dartmouth, Columbia, and Yale. Columbia University received almost 6,500 applications while Yale received 7,939 applications and accepted only 837 candidates. 3,999 applicants were deferred while 2,997 students were denied. Meanwhile, Dartmouth’s ED applicant pool saw 2,664 applicants—29% higher than last year’s. Let's take a closer look at admissions trends across some of the most prestigious campuses. 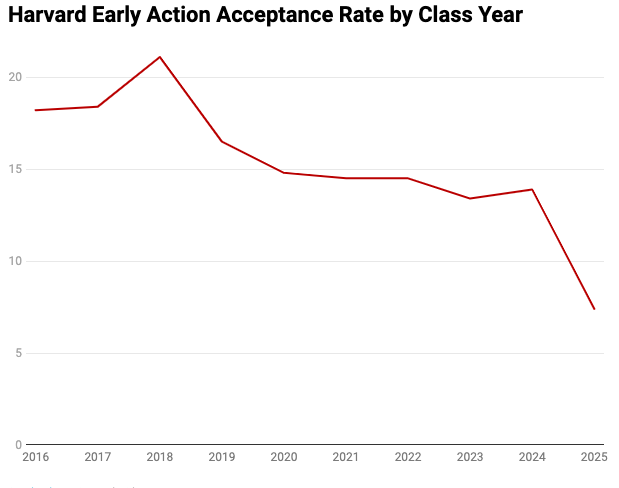 Harvard has also released this graphic reflecting the early data. As you can see, the school has become increasingly competitive in terms of early acceptance rates in the last 10 years. Even the difference between last year’s 13.9% and this year’s 7.4% is a big one.

MIT was the most competitive school this year. 15,036 students applied in the EA round — a tremendous 62% from last year’s early action period! This prestigious STEM-focused college offered admission to 719 students. This is approximately the same as the number of students admitted in the early round last year. However, due to the incredible increase in application numbers, the acceptance rate went down from 7.4% to a brutal 4.8%.

Yale’s admissions office received a record 7,939 applications in the early action round — an increase of 38% over last year. 837 students were admitted to Yale via its early action round. 50% of students who applied through the restricted early action option were deferred. Meanwhile 38% of applicants were denied admission.

Brown continued its dedication to admitting a diverse pool. 59% students applied for financial aid, while 16% of admitted students are first-generation. Within the admitted group, 48% are students of color, including students who self-identify as Black, Latinx, Native American, Native Hawaiian or Pacific Islander, or Asian — a 8% increase from last year.

The number of early decision applications at Dartmouth College—2,664—increased by almost 29% this year. The early decision acceptance rate decreased from 25.5% to 21%. The 2020-2021 cycle was the fourth year out of the last five that the Dartmouth applicant pool reached a new high. Of the 566 admits, 36% are Black, Indigenous or people of color, 16% are first-generation and 14% live outside of the U.S.—these are all early decision records at the university.

The 2020-2021 cycle has also been a unique year thanks to the test optional policies that many colleges adopted due to the pandemic. About 38% of total early decision applicants chose not to include standardized testing as part of their UPenn application. Of those admitted, 24% did not include test scores.

Johns Hopkins admitted 520 students through the binding early decision path. At JHU, there was an 11% increase in early applicants from last year. Duke University also saw an all-time high for early applications. The home of the Blue Devils accepted the lowest percentage of ED applicants in its history—admitting 840 out of 5,036 students, resulting in a 16.7% acceptance rate. Emory’s early decision applications increased 8% over last year and 43% from five years ago. Meanwhile, UVA has enrolled 25.8% of the incoming class through the early pool.

Now that you’ve familiarized yourself with the early action and early decision acceptance rates 2020-2021 at some of the most prestigious colleges and universities, make sure that the schools on your list are still a suitable fit for you. As you take the final steps in revising your essays and updating your activities list, use the data to your advantage and make the decision that’s best for you. Good luck!