The SAT Adversity Score: What to Know About This New Component

The SAT Adversity Score: What to Know About This New Component

If you’ve been keeping up with admissions news, you know that the role of the SAT has been a point of contention in the college application process for many years. You’re also probably not surprised to hear that the SAT has been criticized for favoring wealthier students above others. This tipping of the scales has led several top schools to adopt test optional policies, giving low-income students a fair shot at college admissions. To address the criticism and provide students from disadvantaged backgrounds with more leveled chances, College Board recently introduced the SAT adversity score.

Over the last few years, College Board tested the adversity score to assess students’ SAT score on a scale based on their socioeconomic status. They started by offering 10 colleges context on students’ backgrounds in 2017. By 2020, the SAT adversity score will become available to all colleges, offering admissions officers a more in depth look at a student’s background to determine the factors affecting their test scores and preparation.

So, how exactly will the introduction of the SAT adversity score play into admissions decisions? Is there anything you need to change in your SAT preparation? To help guide you through how the new policy works, I have elaborated on what the SAT adversity score measures, how it is calculated, what has changed with the introduction of the policy, and the role it will play in admissions decisions moving forward.

What is the SAT Adversity Score and How is it Calculated?

College Board has introduced the SAT adversity score to provide admissions officers with more information on a students’ neighborhood, school, and family information, rather than having individual admissions officers trying to infer context from their race, ethnicity, and family information. Alongside being tested on their verbal and mathematical skills, the adversity that students may or may not have faced while growing up will also be measured. A disproportionately high number of low-income families in the United States are people of color and immigrants who have less access to good schools. As reflected in the graphic below released by College Board, black and Hispanic students generally tend to have lower SAT scores. 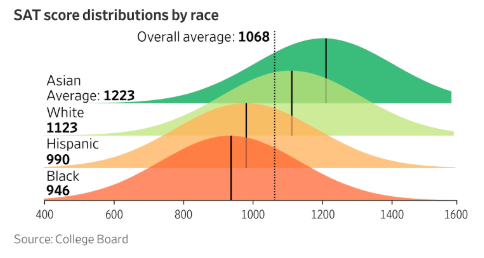 Although race is not factored into the SAT adversity score, College Board hopes to address the fact that income levels in the country disproportionately correlate to race. Often, families of color have the lowest income, and may not be able to offer the highest level of education for their children.

The adversity index measures 15 factors based on a students’ neighborhood and high school information. These are:

Students only provide their high school name and address, and College Board uses publicly available data to determine the rest of the numbers. Students are then ranked on an “Environmental Context Dashboard,” which is essentially an adversity scale from 1 to 100 based on the records published by the US Census and the National Center for Educational Statistics. 50 is the average, 1 indicates the lowest adversity, while 100 indicates highest. So, the higher the student scores, the greater the hardship they are assumed to have faced in their upbringing.

This graphic displays general information about a student’s high school, such as the neighborhood environment, senior class size, free/reduced lunch, and average SAT scores. Officials then take a look at AP opportunities including the number of seniors who have taken AP classes, average AP exams taken, average AP scores, and the comparison of the student’s score with others in their high school. The total high school disadvantage level is scored out of 100. Next, environmental factors such as family stability, median family income, housing stability, educational level, and crime level are evaluated to give the student a neighborhood disadvantage score out of 100. The two scores are averaged to find the overall SAT adversity score.

Once a student’s traditional SAT score is available alongside the SAT adversity score, College Board sends the student’s complete score to all colleges they apply to. While admissions officers can view the score, the student has no idea where they place on the adversity scale and will never see this metric.

What Changes Does the SAT Adversity Score Bring?

The introduction of the SAT adversity score does not change a student’s traditional SAT score. But as you saw in one of the high school factors considered in Figure 2, the Environmental Context Dashboard does show how the student’s score compares to others from their high school. When using the scale, admissions officers can determine if a student’s low SAT score is relatively average when compared to students who come from a similar background and access to resources.

While race is not a factor in calculating the Environmental Context Dashboard, as seen in Figure 1, students of color are more likely to score above 50 than white students. But, if a white student is from an equally low income neighborhood and high school with minimal resources, their SAT adversity score also goes up. So the change does reflect an effort to help colleges diversify their populations.

Most colleges today strive to admit a diverse student body - you might have noticed that schools often highlight the diversity rates in incoming class profiles after admissions results are released. The SAT adversity score can serve as another indicator, ensuring that colleges admit students from different backgrounds, including first generation and low-income students.

In the 1990s, SAT administrators ran a brief initiative called the Strivers program which assigned students a score based on their race and economic background. It met with numerous protests, and the program was subsequently cut. Because the SAT adversity score does not add a numerical score based on race, it might prove to be more successful, and has already started to factor effectively into admissions decision at trial institutions.

According to a report by NPR, early results from the SAT adversity score pilot program show that when a student’s background has been taken into account, more low-income students receive acceptance letters in their mailboxes. For colleges using the SAT adversity score as a trial unit of consideration in the college application process, their acceptance data already reflects this effect. Yale University has admitted 20% more low income and first generation students into its freshman class since the introduction of the Environmental Context Dashboard. Florida State University announced that using the socioeconomic data provided by College Board increased their nonwhite enrollment from 37% to 42%.

Since the announcement of the SAT adversity score, there has already been backlash from privileged students and their parents. Some feel that the introduction of the adversity scale creates a disadvantage for these students, and that it fails to include many other kinds of adversity, such as health problems, family dysfunction, or other unique trials a student may face. The data does not account for other excruciating circumstances such as illness or death of a family member. Statistics cannot completely level the playing field or explain every situation. For example, of two families who struggle financially, one could rent a home in a better neighborhood, while the other owns a home in a poor neighborhood. In this case, the family that owns the home would score higher on the adversity scale based on their neighborhood alone. Students’ situations vary on a case-by-case basis and numbers alone can never capture that. The scale is certainly imperfect, but at this point you should make the most out of the resources you have, and concentrate on putting your best application forward! As has been the case previously, your personal statement and supplemental essays remain your best opportunity to share your unique context.

How the SAT Adversity Score Will Factor into Admissions

Using the SAT adversity score as a resource may help college admissions officers avoid false assumptions based on a student’s race and ethnicity, and instead evaluate the available facts and figures about neighborhoods and high schools. With data that provides an objective look at discrepancies in resources, the Environmental Context Dashboard acts as a tool to help colleges increase diversity in terms of socioeconomic background, and racial diversity is likely to follow.

College Board officials announced that the score has been most effective in admissions decisions for students on the cusp of an acceptance or rejection. While introduction of the policy won’t dramatically change the statistics at top liberal arts colleges and national universities, it grants a chance to students whose school and neighborhood facilities lack the resources of those from more privileged areas.

The SAT adversity score has so far proven useful in contextualizing adversity, through a tool that is driven by data conveying the quantifiable difficulties students face in their surroundings. Disadvantaged students who are academically gifted, or who demonstrate leadership qualities in their communities, may score lower because a lack of resources hurt their standardized test performances. The Environmental Contextual Dashboard helps admissions officers view applicants in a new light. Once adopted by all schools, the SAT adversity score could play a role in increasing numbers of low-income and first generation students, and act as the driving force behind a different admissions landscape during the next few years.