High School Science Competitions That Stand Out on College Applications

High School Science Competitions That Stand Out on College Applications

If you’re a high school student hoping to venture into a STEM field for your college major and future career, you’ve probably heard that high school science competitions really give students a boost in their overall competitiveness. From Olympiads to ISEF and Google Science Fair to the AIME, each of these competitions carries significant weight in the admissions process. But how do you know which ones are the most tailored to your interests and are considered prestigious in the first place?

High school science competitions are rigorous and demanding, and doing well on them requires a significant commitment of time and effort, in addition to an abiding love for the subject. It’s absolutely true that students who succeed in these competitions are more likely to impress admissions officers at top schools. For example, in 2012, there were only 13 seniors/rising college freshmen representing the United States at various STEM Olympiads. Of those 13 seniors, 10 were enrolled in the MIT Class of 2012. Needless to say, getting to an Olympiad is a big deal! So without further ado, here are high school science competitions that "move the needle."

Olympiads are team based science competitions held around the country at different levels: invitational, regional, state, and national. These high school science competitions are effectively designed to find the smartest students in the world for their respective field. There are 12 international competitions in total, with the oldest (the IMO) founded in 1959. These are outlined in the table below:

In the era of holistic admissions, very rarely can a single achievement swing an admissions committee on the basis of academic abilities alone. However, a gold medal from an International Olympiad holds a lot of power. Qualifying processes for each Olympiad vary by country and by subject, but typically involve a series of rigorous tests (such as the American Mathematics Competition (AMC) and American Invitational Mathematics Exam (AIME) in the case of the IMO) culminating in a training camp.

Slightly fewer than half of attendees receive medals (gold, silver, bronze, usually given in the ratio of 1:2:3), but most medalists are likely to be flagged during the admissions process as a ‘star’ or ‘talent’ much like a D1 athlete. Accordingly, they are given extra attention during admissions processes.

Hosted by the Society for Science and the Public, ISEF is one of the biggest deals when it comes to high school science competitions, especially if you want to attend an undergraduate engineering school. Every year, some of the brightest high school minds in the world come to ISEF to showcase their research, and its potential to make a significant positive impact on our world. For example, this year’s Grand Winner devised a way to help spinal surgeons improve the accuracy of their screw placement using machine learning and computer vision. That’s definitely a game changing creation!

Even just attending ISEF is considered an honor. Getting there requires students to participate in an ISEF Affiliated Science Fair, held in all 50 states and over 75 countries. And for those who ever doubted the seriousness of high school science competitions, ISEF gives out roughly $5 million dollars a year in prizes, and many attendees continue their work beyond the competition.

Registration Deadline: The Affiliated Science Fair must be held by early April.

Like ISEF, STS is another research competition hosted by the Society for Science and the Public. While ISEF is the largest research competition in the world, STS is a national competition, meaning only students in US High Schools (or US Citizens abroad) can participate. From a pool of roughly 2000 high school seniors (who apply online), 40 finalists are selected and flown to Washington DC to compete for 10 awards.

To give you an idea of the types of projects STS looks for, the winner of this year’s Top Award (worth $250,000) devised a mathematical model to determine the possible locations of exoplanets - planets outside our solar system - that may have been missed by NASA's Kepler Space Telescope. That’s pretty out of this world (dad-joke)! Again, like ISEF, the emphasis is on science research that has the capacity to change our world – exactly what STEM-heavy colleges like MIT, CalTech and Stanford in particular are all about.

Google started as a research project at Stanford, so unsurprisingly the company (now known as Alphabet) loves scientists, engineers and people who genuinely follow their curiosity to some intriguing and innovative end. Google Science Fair launched in 2011 and has gone on to become one of the most well- regarded high school science competitions in the world.

Google Science Fair is a much more accessible event for the average student than the majority of competitions on this list. While doing well on ISEF often requires the support of a faculty mentor and possibly even university-resources and funding, there is no entry fee for Google Science Fair. The application process is entirely online, and the organization supplies some very good resources for students (and their teachers) to get started. Past winners have included a student who found a way to increase the safety of Alzheimer’s patients, and another student who built an app which takes photos and analyzes them for color and shape to determine whether the object has a particular substance.

The grand prize winner takes home $50,0000 in scholarship money, so placing in this competition can help subsidize your college education.

Open to US Citizens and Permanent Residents under the age of 18, the Davidson Fellows Scholarship looks for students who are pursuing a ‘significant piece of work’ as defined by experts in their respective fields. Students receive scholarships of either $50,000, $25,000 or $10,000 depending on the quality and completeness of their work. From the 2018 Fellows, one of the top prize winners constructed an early warning system to detect the Zika virus in mosquitos (reducing current research methods of 2-4 weeks down to 15 minutes). Amazing, right?

Google Code Jam and Facebook Hacker Cup are competitions generally geared for college students and professionals looking to get noticed by prospective employers. However, for a high school student to make it to Round 2 (Top 1000 competitors out of a worldwide competition for Google Code Jam, Top 500 competitors for Facebook Hacker Cup) can be considered a major accomplishment.

Initially founded as a class at MIT in 2003, today the International Genetically Engineered Machines (iGEMS) competition is an opportunity for high school and college students around the world to work on serious global challenges using ‘synthetic biology’. Examples of past projects include environmental bioremediation, medical delivery systems, and alternative energy sources. Successful projects require hard work and dedication, and, unlike the other competitions on this list, participation in iGEMS requires a sizable team (8+ members).

The Harvard MIT Mathematics Tournament is one of the few high school science competitions organized by college students. Founded in 1998, HMMT has been around for more than 20 years and has built quite a strong reputation in admissions circles.

There are two tournaments held each year - in November (held at Harvard) covering more general topics, and in February (held at MIT), covering Algebra, Geometry and Combinatorics. 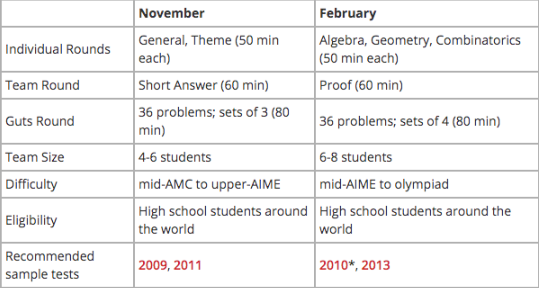 If you so happen to make it to the Top 10, your name will be listed on the HMMT website for all eternity, so a curious admissions officer may just notice.

Registration Deadline: Early October for both November and February rounds

Probably the most widely recognized test for mathematicians on this list and one of the most prestigious high school science competitions, students gain access to the AIME after scoring in the top 2.5% of the AMC. The AIME results are then used to determine who is able to participate in the USAMO. While international students aren’t eligible to attend the USAMO, they can nonetheless take the AIME. A strong score on the AIME for schools like CalTech and MIT would be 9 or higher. A performance like this would indicate to an admissions committee that you possess commendable abilities in mathematics.

The AIME holds competitions for 8th, 10th, and 12th grade twice - once in January and once in February. The difficulty level and format for the two tests are the same, and only differ in the specific questions. Students can register for one or both.

In today’s hyper-competitive landscape, many students and families feel tremendous anxiety about their college prospects, especially when applying to top schools. Developing a field of interest early and earnestly can yield a significant edge in admissions processes. Excelling in high school science competitions is a great way to achieve this edge. While athletes and music stars have other paths available to them, for students serious about STEM, these competitions are some of the best ways to win recognition and stand out.

Can competing in a high school science competition help me get into college?

How do students qualify for the Intel International Science and Engineering Fair (ISEF)?

ISEF is one of the most exclusive high school science competitions in the nation. To qualify, students must compete in an ISEF affiliated science fair and win the right to attend ISEF. Each fair may send a pre-determined number of projects to ISEF to compete.

Tags :stem college applicant,applying to college with a stem major,high school science competitions,which competitions are the best for high schoolers,High School Science Competitions Which Stand Out on College Applications