LSAT vs. GRE: Which One Should You Take?

LSAT vs. GRE: Which One Should You Take?

If the logic games in your LSAT practice tests keep tripping you up or if you’re unsure about your chances when the LSAT goes digital this summer, it might be time to take a step back and reconsider whether the LSAT is the right test for you. Don’t worry, you don’t have to completely abandon your law school dream. This is where the old tried and true GRE comes in. You may have already heard, but as of December 2020, 67 law schools and counting now accept the GRE as an alternative standardized test, since University of Arizona first decided to implement it in 2016. Although the GRE is one of the most common tests used for graduate schools, it’s very new to the law school scene, and it covers much more general knowledge. How do you decide which test you should take when considering LSAT vs. GRE?

The introduction of the GRE in JD admissions helps students who might be looking at more than just law school for postgraduate prospects to keep their options open. It also allows students who are set on law school to take a standardized test that highlights strengths that the LSAT may not, such as math and vocabulary skills. But these are not the only factors that go into deciding which test you should take when applying to law school. To guide you through picking the right test for you, I have expanded on the differences between the LSAT and GRE, how to make the choice according to your interests and strengths, and how LSAT vs. GRE has so far fared in the JD admissions process.

Differences Between LSAT and GRE: Which One to Choose

Although they can both be used for law school admissions (depending on which law school you apply to), the LSAT and GRE are in no way identical standardized tests. Check out their differences as displayed in the table below:

As you can see, when comparing LSAT vs. GRE, the LSAT is far more tailored towards future law students. Deciding which test to take comes down to your skill sets in terms of topics and test taking abilities.

To quickly view the differences between the two tests, you can check out the infographic below! 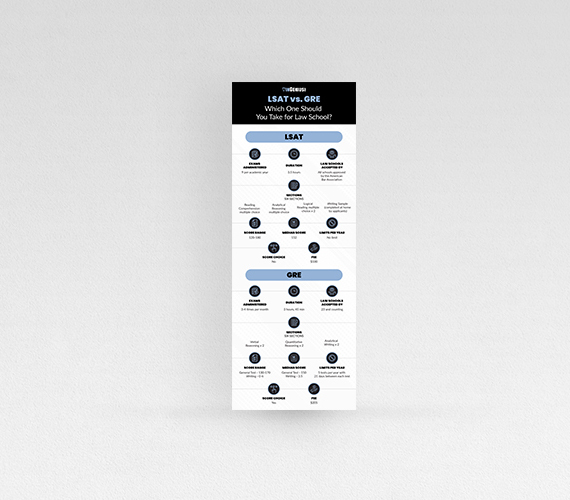 If you are more of a math and vocabulary person, the GRE might be the way to go for you, as long as your list only consists of the schools which accept the GRE, which are:

The GRE also leaves you wide open to other career paths in case you decide that law school is not for you. When debating over LSAT vs. GRE, remember that all LSAT scores are reported so if you’re not a good test taker and want the option of a few tries at the standardized test, the GRE may be a more suitable option. It is also offered much more frequently during the year, so your choice of test date is completely flexible.

If you’re not a big fan of math, you might score higher on the LSAT, although the logic games section uses the same side of the brain. If you’re interested in puzzles, the LSAT will be better for you because logic games will challenge your analytical reasoning as you figure out orders or patterns. Making your school list will be far easier with the LSAT; all schools accept this test. If your target law school doesn’t accept the GRE, then taking only the GRE obviously doesn’t make sense! It’s also easier to determine whether you are fit for a school because the mean and median LSAT scores for schools are more readily available from the decades of data, unlike the recently implemented GRE. Since you can take up to six LSATs in a year, you theoretically can take it one more time than the GRE - although I wouldn’t recommend this choice!

So think about your priorities - do all of the law schools on your list accept the GRE? Would you benefit from the GRE’s score choice option? Are you hesitant about law school and want to consider other graduate schools as well? Draw out a list of pros and cons and see which test better suits you.

The Role of LSAT vs. GRE in the Admissions Process So Far

Law schools introduced the acceptance of the GRE to allow students more accessibility, since the GRE is offered more times at more locations than the LSAT. The GRE naturally also attracts students from different academic backgrounds. The University of Arizona was the first to include it in February 2016, followed by Harvard Law School and several other top 14 law schools. Competitive programs added the GRE option in order to attract a diverse applicant pool and admit a well-rounded class. However if your GRE score is not high enough, it can keep your application from being considered. According to the American Bar Association (ABA), a student can be accepted without the submission of an LSAT score only if their score is above the 85th percentile on the GRE nationwide, so that is definitely something to keep in mind when deciding which test is the right choice for you.

Understandably, since the LSAT is completely geared towards JD students and assessing whether candidates have what it takes to perform well in law school, the majority of law students continue to take the LSAT. From the 38,000 students who entered law school in the fall of 2018, only 168 didn’t submit an LSAT score. The University of Arizona, Harvard Law, and Georgetown Law all had the most GRE-takers, with 18 admits each. Clearly the implementation of the GRE did not immediately make a dramatic impact! So, if you’re on the fence between LSAT vs. GRE and want the best odds of law school acceptance according to these stats, take the LSAT.

The choice you make when it comes to LSAT vs. GRE should rest primarily on which suits your strengths. It might be wise to take the LSAT since your school options are very limited for the GRE. If you take the GRE first and your score is high enough, you could apply to the GRE-only schools without ever having to take the LSAT. Why not sit down and take practice tests for both? You might have the perfect test for your skills waiting for you.

Tags :How to Study for LSAT,LSAT,applying to law school,GRE,lsat vs. gre