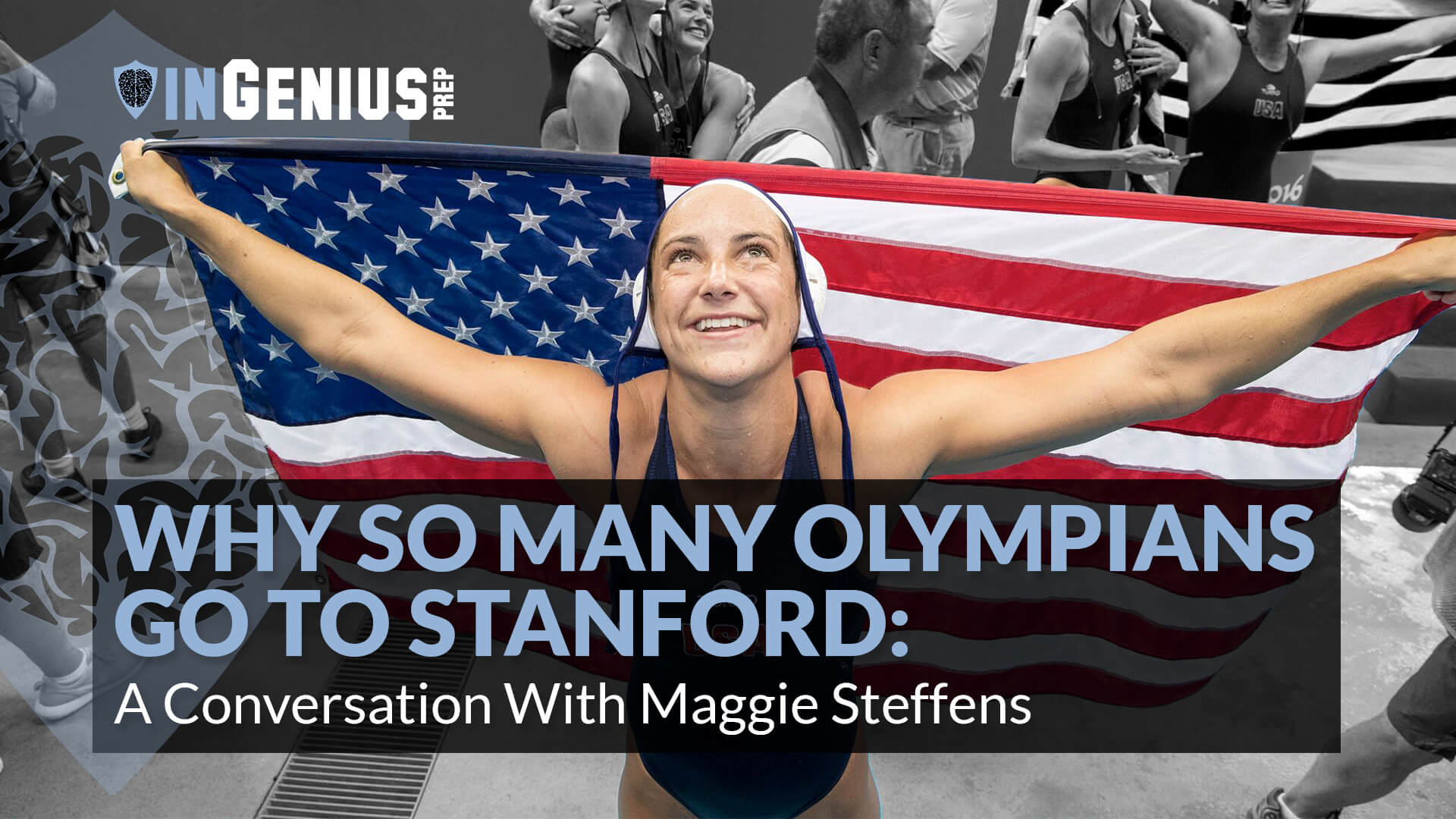 Why So Many Olympians Go to Stanford: A Conversation with Maggie Steffens

On the USA women’s water polo team alone, there are four Stanford Olympians, one from Princeton, six from UCLA, and two from USC. The team is made up of players who attend or graduated from top-25 schools exclusively.

And while taking the water polo example might seem skewed because water polo is a highly regionalized sport, athletes that competed in the Olympics were largely from top academic schools. Figure 1 shows the concentration of colleges with the most Olympians on Team USA. Stanford Olympians top the list by a high margin.

So, to get at the heart of why this correlation between high athletic achievement and academic success exists, we asked one of the Stanford Olympians herself.

While applying to Stanford, I wanted to make it as hard as possible for them to NOT accept me - Stanford has extremely high standards, even for athletes. Most other schools did not require me to even apply due to water polo.

Basically, I would just have to sign a piece of paper and that was it - I would be in. Stanford was the opposite. I had to take the SAT three times in order to have a good enough score. I had take AP classes while training for the Olympics. I had to apply early and make sure it was as perfect as could be so they couldn’t turn me down. I didn’t have the highest SAT score, but I had a lot of drive and persistence to offer the school.

I personally enjoyed the challenge that the Stanford acceptance process presented me with. It made me feel like all my hard work and all the extra classes were all worth it - I was on the right path. This was when I truly realized Stanford wasn’t just trying to recruit the best athletes, they wanted the best scholar-athletes - people that strived to be the best in everything they did.

2. Why did you choose Stanford?

I had a difficult time during the recruiting process at first because I was so wrapped up in all of the different opportunities. But like I said before, I think through all the chaos, something finally clicked. It felt like Stanford was my reward for everything I had done to that point.

My acceptance was a gift for all the sacrifices I had made to be a great student, a great athlete, and even more than that. I loved knowing that Stanford was full of people that were receiving this gift and ready to enjoy it and make the most of it. Of course I loved the campus and it’s beauty, I loved the pool and the team, but I think I loved knowing that every person at Stanford had a unique and special story that I was eager to be a part of.

I might have been one of the Stanford Olympians, but there were rocket scientists, first-class musicians, published authors, and so many more incredibly talented people in my freshman class!

3. How do Stanford Olympians balance training while also excelling in the classroom?

It is definitely tough to be an Olympian while you are still in school. The USA Water Polo Team trains 6 ½ hours a day, 6 days a week - so it’s hard to mock that while taking nearly 20 units of class. But, Stanford does a great job of supporting their athletes and their dreams and helping with time management tips for students. They want us to be great, they want us to exceed expectations, without sacrificing our academics.

I had to do a lot of extra work on my own or be in constant communication with my professors since I was always on trips, but truly, I felt support from everyone. Whether you’re one of the Stanford Olympians or a Stanford researcher, the school supports your dreams.

During the year leading up to the 2016 games, I took a gap year from Stanford so I could fully commit to the Olympic process. I feel very fortunate to have such great support from my school and know I will be welcomed back with open arms.

4. How has water polo prepared you for success at Stanford and beyond?

Water polo is one of the toughest sports out there: mentally and physically. It is a game where you must be mentally tough to handle the demanding training and willing to do so with a team. I believe this is what prepared me most for my success at Stanford and beyond.

I have learned to give myself fully to my passion or in other cases, whatever the task is at hand. I understand the importance of failing and getting back up, because that is the only way you’ll continue to improve. I understand the importance of teammates and how to work with others - how to achieve a common goal while building one unit of many different entities. This strength & toughness while working with others is something I know will benefit me in everything I do.

5. What do you think sets Stanford Olympians apart from athletes who go to other schools?

I believe the thing that sets Stanford Olympians apart is the understanding of the “bigger picture.” That is something so refreshing about any of the other Stanford Olympians I have met. They may have 5 Gold Medals and be the best in the world, but you would have no idea because they are always trying to get better. They still want to do other things in their life and not be defined by just that title. They use their Olympic title to take the next step in becoming either a better athlete, a better person, a better student, a better entrepreneur - whatever it is.

It is a truly refreshing quality that I believe comes from the understanding that the Olympics may be our dream and the pinnacle of our respective sport, but that doesn’t define us. Studying at Stanford allows us to pursue other dreams outside of the Olympics.

6. Why do you think Stanford has the most Olympians? What does it say about the school?

I believe Stanford has the most (American) Olympians because the culture supports the Olympic dream. The Stanford culture is all about being your best and surrounding yourself with the best. It’s about knowing you can be better tomorrow than you were today - whether in athletics, research, or business ventures - and there are people around you to help you get there. That is what the Olympics are all about - the Olympic dream coincides directly with the Stanford culture.

Top schools want students like Maggie, other Stanford Olympians, or top athletes. They bring prestige to the school and allow them to recruit other incredibly talented students. But, as Maggie said, Stanford also is home to some of the smartest, driven, most talented people in the world. Stanford Olympians make it to such a high caliber school because of this smart, driven attitude that allows them to be leaders on the field or in the pool, but also leaders in the classroom.

Congrats to Maggie, her fellow Stanford Olympians, and other student-athletes who were fortunate enough to make it to Rio!