As you embark on your college search and look through a list of options on the east coast, you may be confused to see two very similar names and think, wait, Boston College is not the same school as Boston University? That is correct. In fact, with nicknames ranging from the Green Line Rivalry to the Battle of Boston and the Battle of Commonwealth Avenue, the intense Boston College vs Boston University rivalry is actually a highly popular one among students in Massachusetts. But which school is better for you?

As the Boston College vs Boston University debate continues and your college application process inches closer, you might be wondering which of these schools’ academic options and campus offerings are better suited for your interests and goals. To help you understand how Boston College and Boston University vary from each other, I’ve outlined differences and similarities between the two schools, along with their academic programs, social life, and the success of alumni.

The most obvious difference in the Boston College vs Boston University debate is evident in their names. Because one is a “college,” and another is a “university,” they vary significantly in terms of their student populations. While Boston College (BC) does offer graduate degrees, the majority of the student body consists of undergraduates, while for Boston University (BU) the distribution is more even.

The following table demonstrates how the schools match up in terms of campus offerings, academic life, social scene, alumni profiles, and financial aid. Before diving deeper into each of the categories, outlined below are some of the most notable similarities and differences between Boston College vs Boston University.

While the two schools have similar acceptance rates, median numbers, and tuition rates, Boston University has significantly more undergraduate major options and a lower acceptance rate. But one of the biggest differences is in the undergraduate population. BU has over 3 times as many undergrads as BC. So, depending on the class size and student body population you’re looking for from your ideal college, your decision of whether to apply to Boston College or Boston University could vary. Both BU and BC are private research schools and thus neither offers in-state advantages when it comes to tuition. Let’s compare and contrast some of the other ways these schools differ.

Although both can be accessed by the same subway, the main Boston College campus is actually located in Chestnut Hill, which is a few miles west of downtown Boston, about fifteen minutes via subway. When it comes to Boston College vs Boston University, BC wins in campus size. The total campus area, including the Newton campus and the Brighton campus makes up 340 acres - 175 of those being located in Chestnut Hill.

If you want to live close to a city but prefer being away from the bustling traffic, the BC location allows you space to spend your academic years surrounded by gothic towers that reach into the sky. Unlike Boston University, Boston College very much has a clearly designated campus, so you may feel a greater sense of community at Chestnut Hill. 85% of students live in one of the 29 residence halls and have options to eat in any of the 13 dining halls. The rest of the students live off campus either in Chestnut Hill or in neighborhoods of Boston that are still easily accessible from campus. 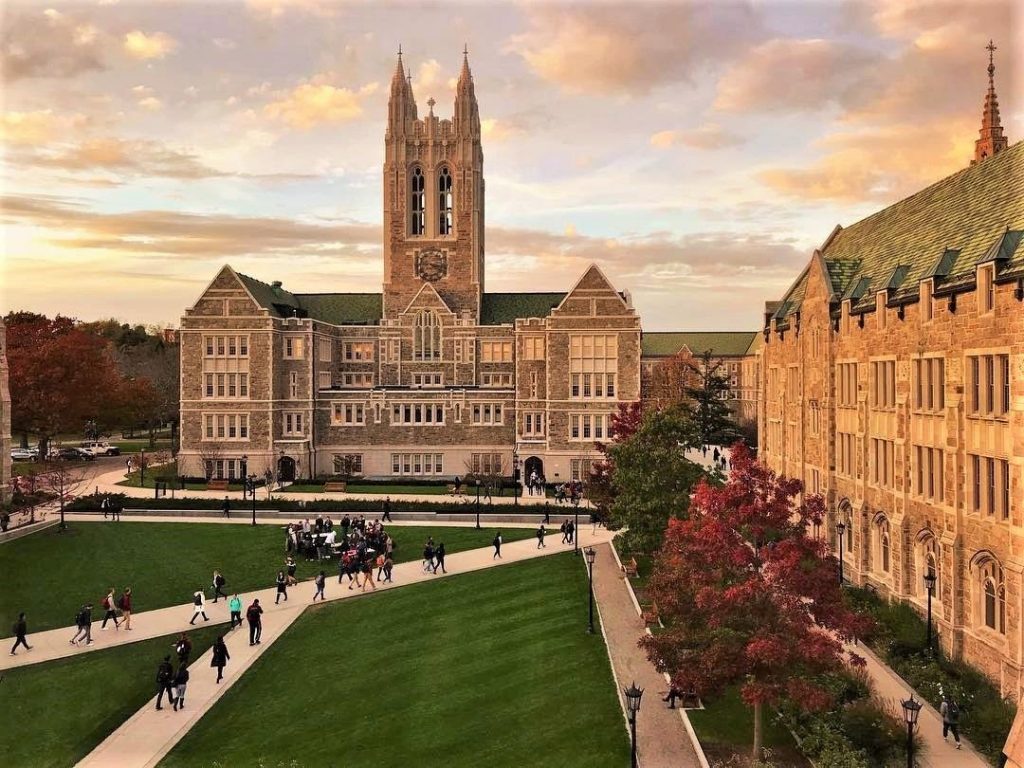 Boston University, on the other hand, is located at the opposite end of Commonwealth Avenue, in the heart of the city. The campus is divided in two: the main campus, which hosts most of the schools and classroom buildings, and west campus, which is home to athletic facilities, the large west campus dorm, and the John Hancock Student Village. These are separated by the Charles River running towards Cambridge. The total land area covers 135 acres, making it smaller than Boston College.

BU students have access to a variety of housing options - they can enter a lottery to live in large, traditional-style buildings, smaller and cozy brownstones, their own apartments that come with personal kitchens, or in the “house” in the student village, which is 18 stories tall and hosts up to 800 students. You can pick and prioritize based on what you believe is your ideal living situation. 75% of students live on campus, which helps create a campus feel, especially for those living in the student village. 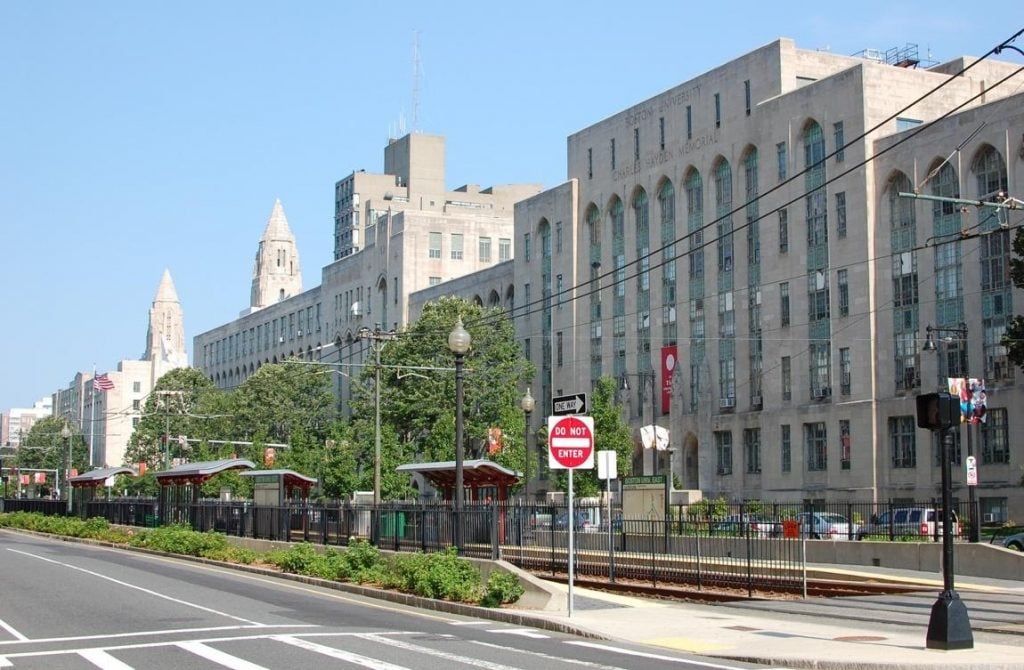 As part of their Core Curriculum, Boston College requires that students take classes exploring interdisciplinary options to help identify their intellectual path. Students can choose from majors and programs including Leadership in Higher Education and Community Settings, Islamic Civilization and Societies, and Managing for Social Impact and the Public Good. While you have to choose one of its 4 divisions as your main college when you apply to BC through the Common App, you’re encouraged to take courses outside your department as well.

Though transferring between schools is possible, it’s fairly competitive. For instance, The Carroll School of Management accepts a very small number of internal transfer students during the spring semester of their sophomore year via a lottery process. They all require an essay elaborating on reasons for transfer.

Boston University has a wider range of academic options for students, as you can probably tell from the difference in the number of undergraduate colleges. Available major options include Deaf Studies, Sound Design, Marine Science, and Hospitality Administration. If you’re someone who has very specific and unique goals in mind, such as pursuing hotel management or theatre production, definitely look into the offerings at BU.

The most common majors at Boston College are Economics, Finance, Biology, and Psychology, while the most popular concentrations at Boston University are Marketing, Communications, Journalism, Social Sciences, Biology, and Engineering.

Boston College offers more than 300 student organizations across the fields of arts, music, dance, STEM, activism and social justice, health, business, culture, and more. You can explore an interest through organizations such as Fashion Club, Musical Theatre Wing, and Retro Gaming Club. You can meet students who share a similar background or identity through the Japan Club or LGBTQ Leadership Council. The campus comes with its own art museum and theater/arts center so that you can enjoy shows and exhibits by both students and professionals. If you’re interested in fitness, you’ll be happy to know that Boston College has 31 intercollegiate Division I teams, 44 intramural sports programs, club sports, and the opportunity to take courses in aquatics, spin, and yoga. Attending football games and hockey games are a huge part of BC’s campus culture, so that’s something to prepare for if you’ve got your eyes on this school.

At Boston University, the social scene is more integrated into the city of Boston. BU’s central location makes it possible to venture out anytime. Students can see an exhibition at the Museum of Fine Arts, attend a show at the Boston Playwrights’ Theatre, or watch their favorite artist live in concert at BU’s own Agganis Arena.

That doesn’t mean the university itself is lacking in options within campus. BU is also a Division I school and has a big athletic presence, but sports culture is more dominant at BC than at BU. If you’re into fitness, Boston University is home to the Fitness & Recreation Center. You can swim, jog, practice yoga, play squash, spin, and rock climb at this 270,000-square-foot facility.

There are over 500 student organizations to choose from at Boston University. Whether your cup of tea is the Marine Science Association or you’re more likely to join the PC Gaming Club, you can explore a variety of topics that appeal to you. If you’re interested in community service, you’ll be happy to know that this school sponsors a range of outreach programs, from tutoring a recent immigrant in English to helping build an urban garden. One point of difference between Boston College vs Boston University is that BU has an option for participation in Greek life while BC doesn’t. BU students can join one of the 12 fraternities or sororities. If that’s something you’re looking for out of your college experience, BU may be the school for you.

As a prospective student, you might also wonder what the profiles of alumni look like for Boston College vs Boston University. For Boston College graduates, the four-year graduation rate is quite high at 91%, and the mean starting salary is $59,900. The median salary after 10 years is $90,900. 19% of the Class of 2018 are currently in graduate school (including medical school and law school), while 11% work in healthcare, 10% work in financial services, and 9% work in consulting. Alums work for several well-known companies including Oracle, JPMorgan, Amazon, Dell, and Google. Graduates also volunteer for associations like the Peace Corps and have been awarded fellowships such as the Fulbright.

Boston University has a slightly lower four-year graduation rate at 85% for their much larger undergrad student population. The average starting salary for BU graduates is $57,500 and the median salary after 10 years is $72,000, significantly lower than the earnings of typical BC grads. 19% of BU students pursue graduate school, while employed alumni often work in business management, marketing, journalism, consulting, engineering industries. They’ve gone on to work for companies such as Accenture, Deloitte, Brigham and Women’s Hospital, Marriott, Accenture, and Boston University itself. BU graduates also have a big presence within Teach for America.

The Boston College vs Boston University comparison goes far beyond just saying that they’re both located in or near Boston. Hopefully, now you have a clearer picture of how the two schools differ and which might offer academic resources, extracurricular options, and networking opportunities that are more suited to you. If you believe either or both of these institutions are worth your time, try to visit campus and conduct more thorough research. Good luck!