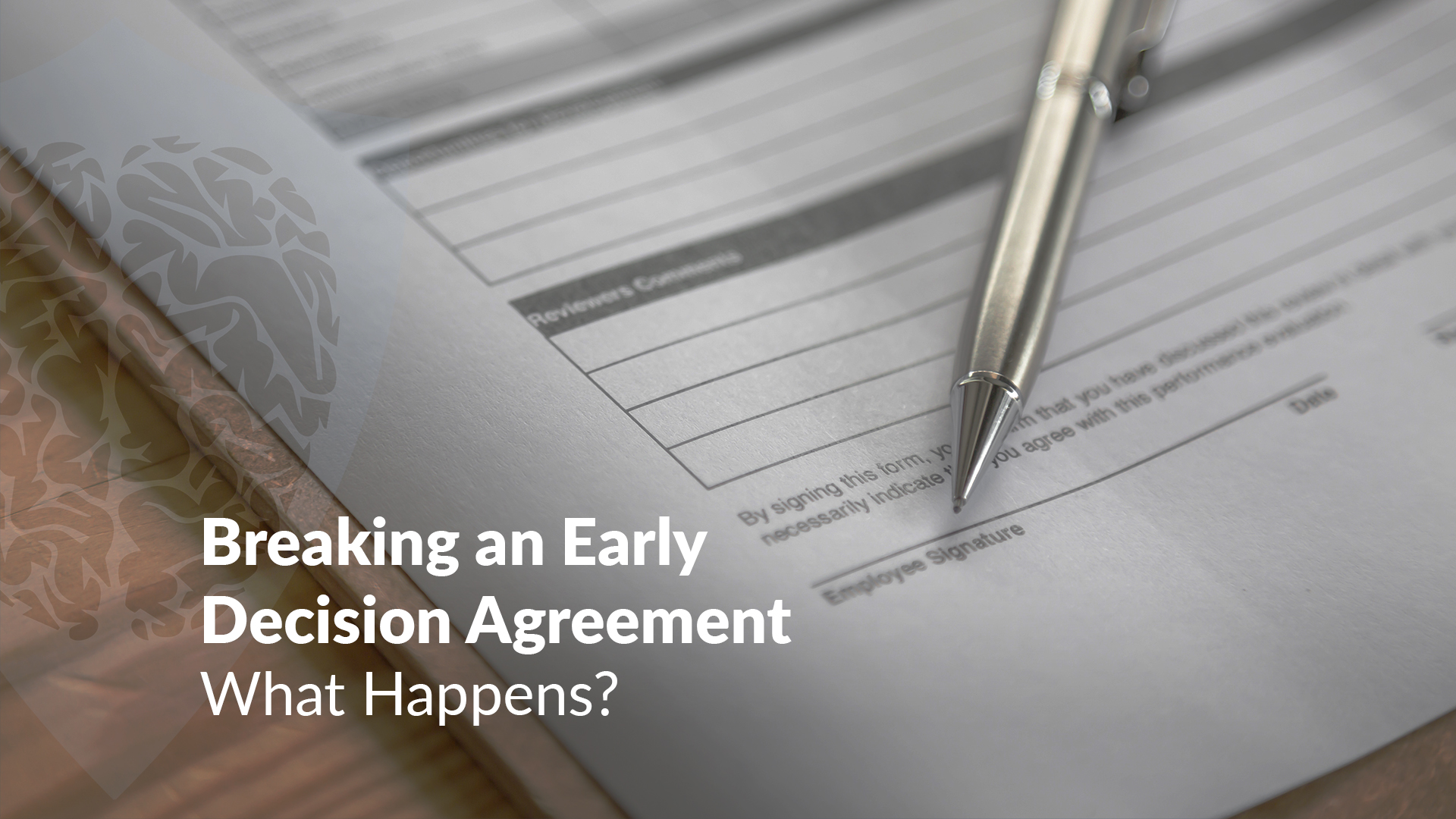 In this blog, I am going to go over why schools care to enforce Early Decision agreements, how they do, and under what circumstances applicants may be able to obtain a release from such binding agreements.

Why do schools care if I break my Early Decision agreement?

Schools use Early Decision as a tool to improve both their quality of incoming students and their yield rate. But where did it come from? The Early Decision plan was an innovation in the early 1990s by the University of Pennsylvania which—like all other colleges—encountered a substantial drop in the number of applicants caused by a precipitous fall in birth rates eighteen years before. In order to ensure that they were able to more effectively compete with schools like Harvard and Yale, they offered students the opportunity to leave their admission fate in the hands of the Penn admissions office in exchange for early notification in December. The catch was—and still is—that they must attend if admitted early.

The Ivy League schools have a common Ivy League agreement, which makes each school agree to the terms of early notification plans regardless of what specific plans each offers. Here's what Dartmouth has to say:

In short, schools are very careful about not taking students who have already committed in a binding fashion to another school. Failing to follow the common guidelines in the Early Decision agreements could result in serious consequences for a school. For example, a school could be punished by not being allowed to participate in the Common Application or another similar application system in the future, or could face punitive measures from the College Board.

Because your violation of Early Decision agreements could result in big problems for the school itself if they don’t redress your wrong swiftly, they have an incentive to be extremely careful and discerning about these types of situations.

How will schools even find out that I broke my Early Decision agreement?

Next, let’s go back to looking at it from the perspective of an individual applicant and answer the basic questions of how you can get caught breaking your Early Decision agreement and what will happen if you do. There are two primary ways in which schools find out if you’re trying to game the system:

1. Information Sharing Between Colleges: Many colleges, including the Ivy League schools and a consortium of about 30 colleges, share lists of students admitted through Early Decision programs. If I’m able to make a formula in a spreadsheet in five minutes with this data to root out violators, I assure you the schools have even better and more streamlined ways to do the same.

Katharine Fretwell, Dean of Admission and Financial Aid at Amherst College, confirmed this list sharing between colleges in a recent interview, as have dozens of the InGenius Prep Former Admissions Officers. Katharine Fretwell also explained that schools share lists of students who try to back out of Early Decision agreements for ostensibly valid reasons like inadequate financial aid packages in order to ensure that people are not hiding behind a manufactured excuse to choose another school.

2. Your School Counselor: Your school counselor or some other school official will be required to sign on to your Early Decision agreement. Scroll up to see the highlighted portion in the signature block of the example from Duke. Your school counselor has to protect the reputation of the school and its ability to help future applicants. Thus, if your high school finds out you are violating the Early Decision agreement in some way, they might take disciplinary action against you. This could harm your chances of getting into that school and others! If you back out in some way, the college admissions office will absolutely be contacting your school to voice their extreme displeasure, and it could have adverse consequences for the next crop of students. One step that some high school counselors take is refusing to send transcripts, letters of recommendation and other necessary materials until they learn the ED outcome in order to prevent you from getting yourself into trouble.

So, what’s the worst that can happen to you if you break your Early Decision agreement? Well, you can lose your offer of admission from the school with which you were trying to get out of your binding commitment and get blacklisted by other schools to which you applied. Not good.

Are there ways out?

The short answer is “yes,” but you need to have a legitimate reason and you need to be communicating with the school you are bound to attend. With their permission, you can break the agreement.

One common way to break your Early Decision agreement is if financial aid awards are not coming in as expected. If you can point to an aid shortfall that would legitimately impact your ability to attend the school, then you will be able to get out of your Early Decision commitment fairly easily. Nevertheless, some schools might ask you to document this fact. If you spurn Dartmouth after being admitted Early Decision and end up attending Penn under the same aid package or less, then you run the risk of Dartmouth ultimately finding out and Penn rescinding your offer at the last-minute or expelling you once you’ve matriculated. This is an unlikely scenario, but certainly not a cloud you want hanging over you throughout your college years.

A second, less common example is to take a gap year and ask the school to essentially give you a re-do. This is a compromise under which you won’t be able to just go to another college, but may be able to re-apply the following cycle to multiple schools. Some schools may not let you retain your original offer if you are breaking the ED agreement, though. Again, you must be talking to the school and get permission from the admissions office.

A final, Hail Mary-approach is to just beg the admissions office to release you from the agreement. You will need a good reason in order to convince them, but they aren’t looking to get retribution or to hurt you. If you were truly pressured by your parents and really did not want to attend the school, then the school won’t be too excited about having you there either. Some school admissions officers—like JHU’s Director of Undergraduate Admissions John Latting or NYU’s Associate Provost Barbara Hall—even admit to bending the rules like this under certain sympathetic circumstances. They are much less forgiving in cases of bad faith, though.

Early Decision agreements are serious business. You need to understand what you are agreeing to in the first place, and ideally have a strong strategy in place that works for you. What works for another person in terms of the mix of Early or Regular Decision schools might not work for you. If you don’t understand the options available to you, seek professional guidance. Be smart, and don’t jeopardize your acceptances after all of your hard work.

David Mainiero, Co-Founder and Director of Operations of InGenius Prep, is an experienced educator and academic and admissions counselor with over almost a decade of experience helping students unlock their potential and achieve their dreams. Having founded and run multiple and small businesses, David has a strong entrepreneurial track record.

David knows firsthand what success looks like and how to achieve it; his passion to help students discover their own passions and realize their fullest potential motivates him to travel all around the world to share his visions for educational access.